The U.S. services sector activity saw a rise in March due to the lifting of pandemic restrictions. However, higher fuel prices and other commodities caused by Russia’s war with Ukraine created uncertainty for many businesses.

According to Tuesday’s Institute for Supply Management survey, inflation and capacity constraints remained major problems. However, the labor shortage had decreased. Anthony Nieves (chair of the ISM Services Business Survey Committee), stated that the Russia-Ukraine conflict “has had an impact on material costs, particularly fuel and chemical prices.”

“The services sector enters the second quarter on a strong footing, but two risks continue to cloud the near term outlook,” stated Bernard Yaros, an economist with Moody’s Analytics, West Chester, Pennsylvania. “The first risk is Russia’s invasion in Ukraine, and COVID-19 remains the second.”

According to the ISM, its index of non-manufacturing activity rose to 58.3 in March from 56.5 in February. This was after three consecutive monthly declines. This also indicated a shift in spending away from goods to services.

After a dramatic decline in infection rates, COVID-19 restrictions were lifted throughout the country. This has resulted in a surge of demand for services such as airline travel and dining out. However, COVID-19 cases in Europe and China are on the rise.

Reuters polled economists to predict that the index of non-manufacturing would rise to 58.4. A reading of 50 or higher indicates an expansion in the services sector which accounts for over two-thirds of U.S. economic activity. 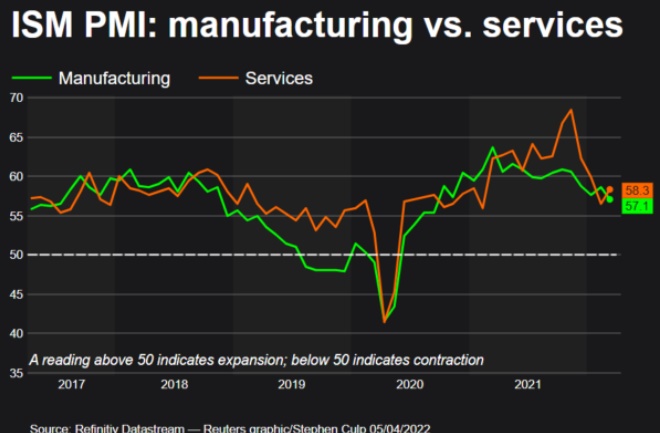 Since Russia invaded Ukraine on February 24, 2018, commodities such as oil, wheat, and fertilizer have seen a dramatic rise in prices.

According to the sector, “grain and fertiliser prices are at an all-time high which has resulted in lower purchasing.” Construction workers complained that the Russia-Ukraine conflict has made “pricing pressures more intense than ever” and that energy prices are on the rise.

Utility companies reported that they are still seeing shortages of raw materials subcomponents, delays in transportation, and price rises. Their counterparts from the wholesale trade sector shared similar views, stating that inflation was increasing but noting that overall sales and profitability are still strong.

The ISM’s gauge of new orders received from services businesses have rebounded to 60.1, a reading that was lower than the 52.1% reading in February.

After falling to a 1-1/2 year low of 48.5 in February and rebounding to 54.0, the services industry employment gauge rose to 54.0. This was also the first contraction in the sub-index since January 2021.

Despite an increase in employment, the services industry did not make significant progress in reducing the backlog.

This resulted in services inflation pushing higher. This indicated that inflation could continue to rise and prompt a response from the Federal Reserve.

Last month, U.S. central banking raised its policy rate by 25 basis points. This was the first increase in over three years. Fed Governor Lael Brainard stated Tuesday at the Minneapolis Fed conference that “I think all of us can agree that inflation is too high and that bringing it down is paramount.”